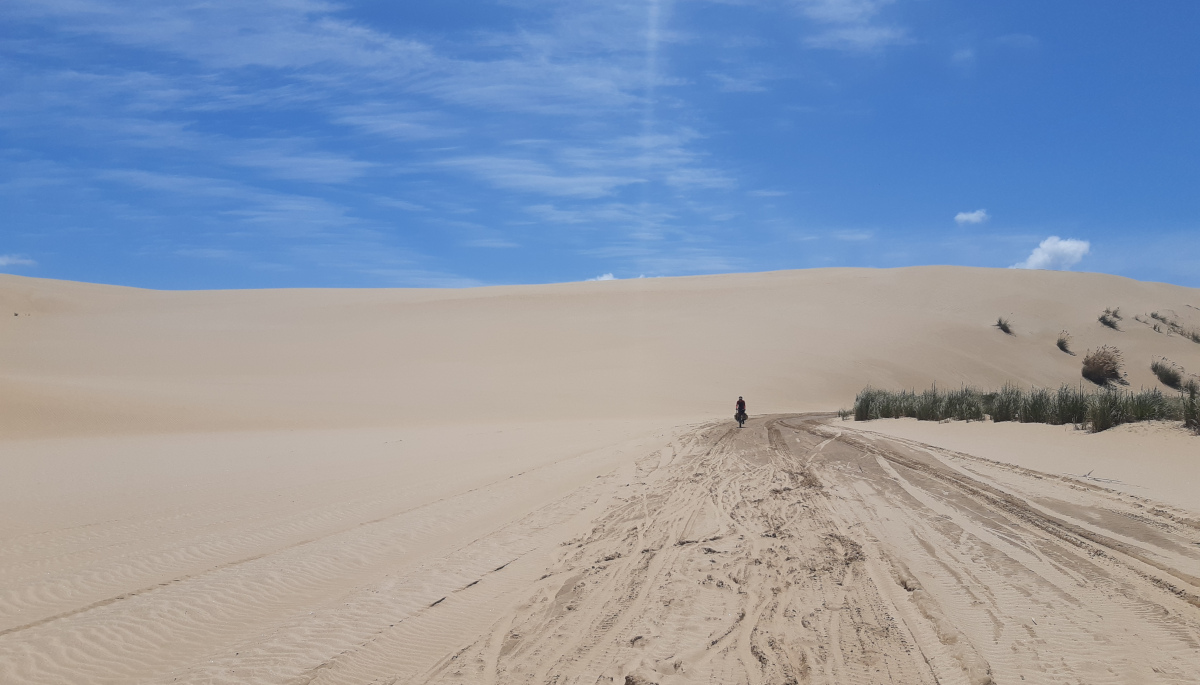 My wife had to get to Auckland and had a lot of kilometres ahead of her so we wanted to wake up early so that she could go.

We slept in the car so it was easy to pack up and go back up the road to Cape Reinga carpark.

I took my bike and bags out of the car and made sure that I have enough water and food on me.

Jokingly I told her that I cannot believe that she is dropping me off here at the end of the road and going away.

I guess I could not believe it myself that from today onwards I need to padal every day to get to Bluff that is 3000kms away.

All my plans that I made finished at this very point. I had no idea what is going to follow. I did not know if I am ever going to get to Bluff so I didn’t plan to get back from from Bluff either.

Our start time was at 1pm and riders started appearing and later on also disappearing from the carpark.

Only a small group of riders started at 1pm sharp. I left the carpark as one of the last riders shortly after 1pm.

It was a windy day and what I didn’t know it was about to get worse.

First kilometres were on the sealed road and then onto the ninety mile beach via Te Paki Stream.

Once on the beach the wind truly revealed itself as a strong and steady headwind.

Riding went really slowly and the beach seemed endless. For couple of hours I rode with a couple of riders so that we could take turns and make the riding easier. Hours were passing faster than kilometres on the beach in the constant headwind. I was eating less than I should’ve and had to eat some salt to make the cramps in my legs go away. I was going through my water and the end of the beach was still way too far away.

The Sun was at the horizon, the tide was coming in, the wind was blowing hard, there was no one else around me so I decided it’s time to camp in the sand dunes.

I pushed up my bike up the sand dune and found a flat-ish place that was sheltered from the wind.

It took me 30 minutes to get the tent up in the wind and get all my stuff and myself inside the tent.

I was thinking about cooking up some dinner, but I was knackered so I lied down trying to get some rest before I get something to eat.

When I extended my hand with mobile in my hand I could get reception on my phone. I got a txt from my wife saying she’s in Auckland and going back to Christchurch so I knew she’s doing well with getting back home. She asked me if there is anyone with me where I am staying. Considering the situation I decided to not answer that question, put the phone down and fell asleep.